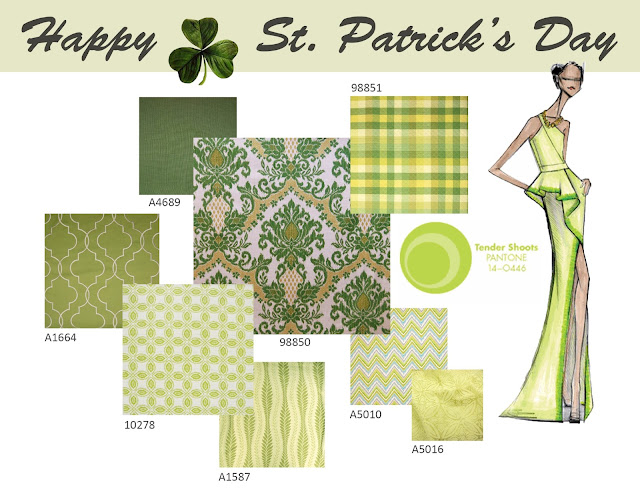 Love, valor, and wit. Faith, hope, and charity. Past, present, and future. The three leaves of the shamrock represent the most sacred number in Irish culture. For centuries the "little clover" has dually represented both Ireland and the United Kingdom, having been integrated into the British Coat of Arms. Yearly, this Irish symbol is presented by the British royal family to the Irish guards’ regiment of the British army. Royalty, honor, and devotion are all three embodied in the emblem on this special day. These rich clover and citrus greens represent new life and the "young sprigs" seen everywhere around this historical holiday. Tender shoots, one of Pantone's colors for 2013, exemplifies the bright qualities and possibilities which surface when exploring the color green in new ways.

Robed in this elegant shamrock medallion, a Queen Anne's chair stands erect in her royal authority while the peak of the foliage outline crowns her in glory. Graceful, yet sure, her majesty reaches out to the tall and bold draperies cascading down the wall in columns of fortitude, dubbing the Irish guards with the symbol of their native land, the shamrock.

"May your blessings outnumber the shamrocks that grow, and may trouble avoid you wherever you go."